Different Strokes (or how the job got done)

Within the last few weeks, I was able to complete a series that began almost a year ago. Usually my format is large and singular. These are only 12" squares so I began by creating the textured surface with them side by side on my work table. 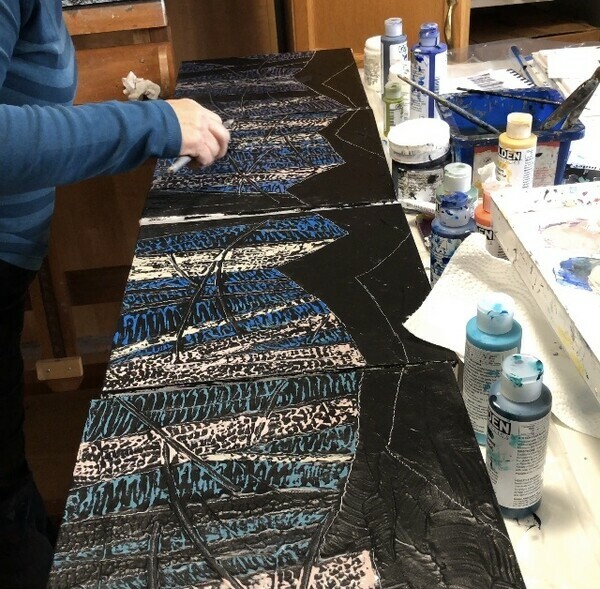 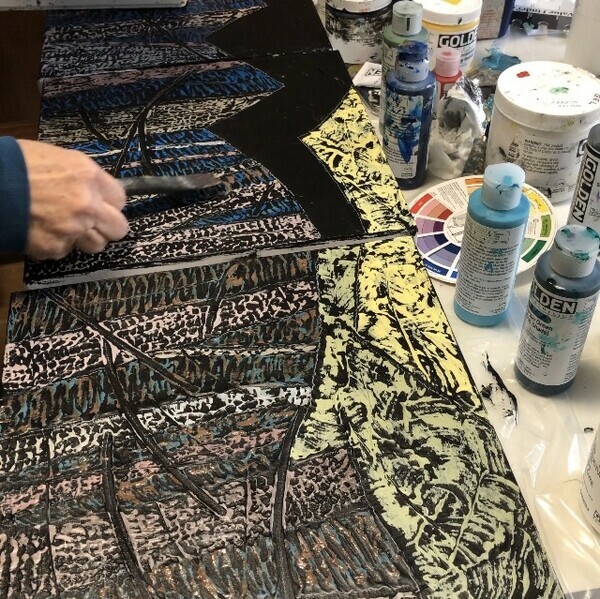 I’ve said in these blog posts before that a member of a series of paintings has some thing in common with the other members of the series. In fact, this series of small works was a followup to a larger work that was sold just before the pandemic. The larger work, Cardinal Under Cover,  was very successful, even getting into a magazine article. I thought it would be interesting to pursue the composition further in a series.

Somehow the series stalled. When I worked on them all at once, they all looked like each other. This may have been efficient because I would have ended up with 4 for the work of one but it didn’t sit well with me. They were too much the same—a bit like an assembly line? Maybe if I had created a separate palette of colours for each one of them it would have had a different outcome. I set them aside and went to work on some other projects.

During the winter, an online course introduced the idea of the efficiency of working in series, hopping between the separate pieces when coming up against some indecision within a piece.  I tried a series again in the context of the course but I ended up with very different pieces and not much hopping or efficiency.

I think the problem may be the fact that some of us fall in love with the idea of creating our painting and want to pursue it to the creative conclusion. When I diverted to another piece in the series, it was more like abandonment than diversion. Even though I understood the principle that I would return to it with fresh eyes, it wasn’t working for me. Was it just one more thing that I needed to practice to get it right? Perhaps.

When I returned to the little four part series begun last year, I didn’t have a totally fresh idea. Yikes! That’s not supposed to happen. Blame it on Covid.  I persevered and came up with Suspended in Cedars which is a bit of a riff on the the original larger version, Cardinal Under Cover. Branching out! 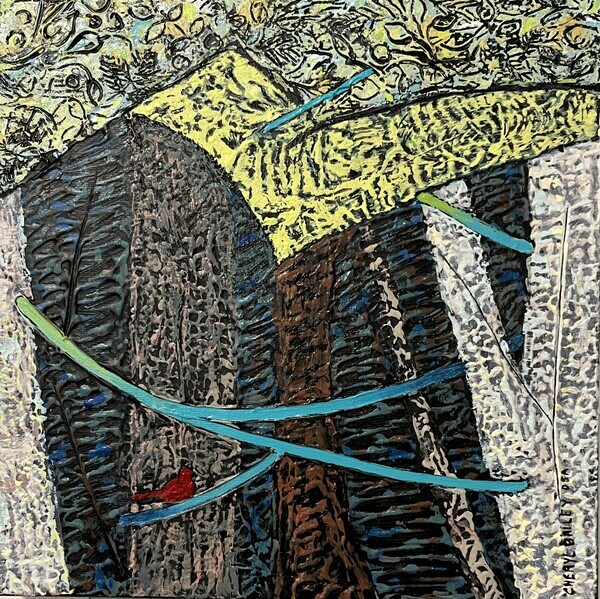 I took the next panel and injected the beautiful fall leaves that were just beginning to change.  “Falling” resulted.The bare branches from the browse line became leaves (or branches;)  I loved it! 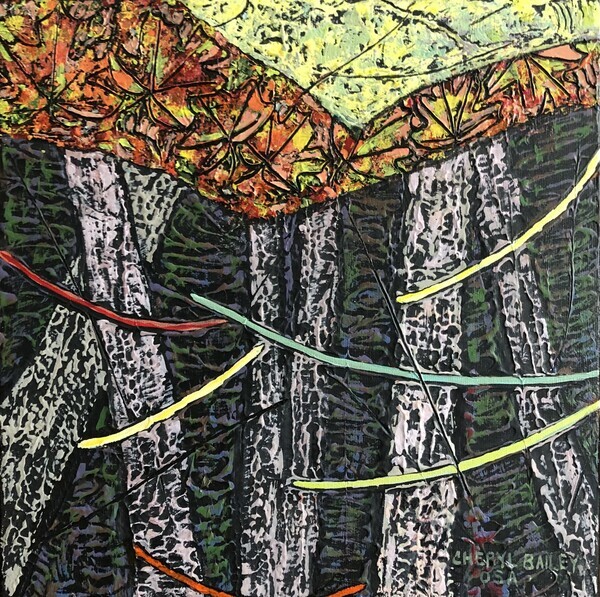 When I turned to the 3rd canvas, I was thinking about our beautiful happy little chickadees, always dependably consuming the black oil sunflower seeds at the bird feeder. The black and white work “Formal Attire” resulted. The chickadees were chattering en masse in the forest canopy. I loved it! 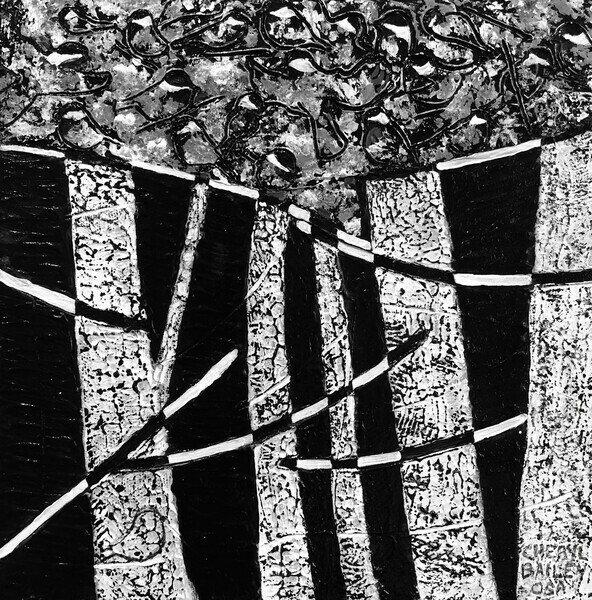 The fourth canvas started with the idea of changing up the value structure in the series. I wanted to make a strong T shape and remembered a sunlit vertical column (that seemed out of place, shown below) between trees at the edge of the forest. The T was strong. With the addition of the colourful striped branches in the dark deer browse line and a little bird coming in for a landing my need for movement was satisfied. 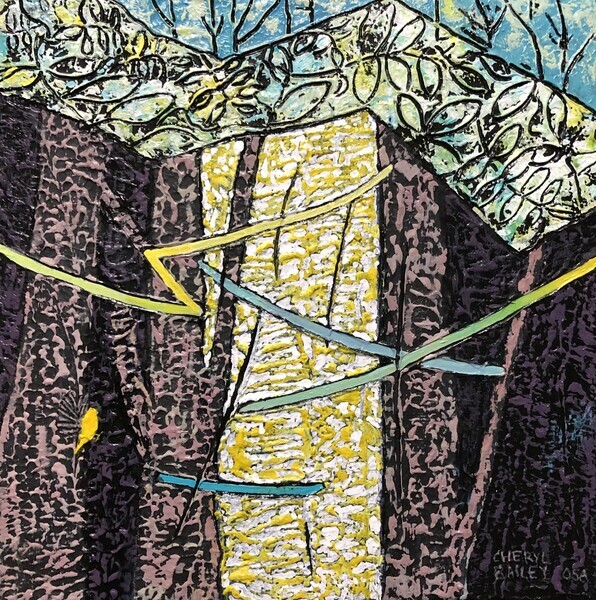 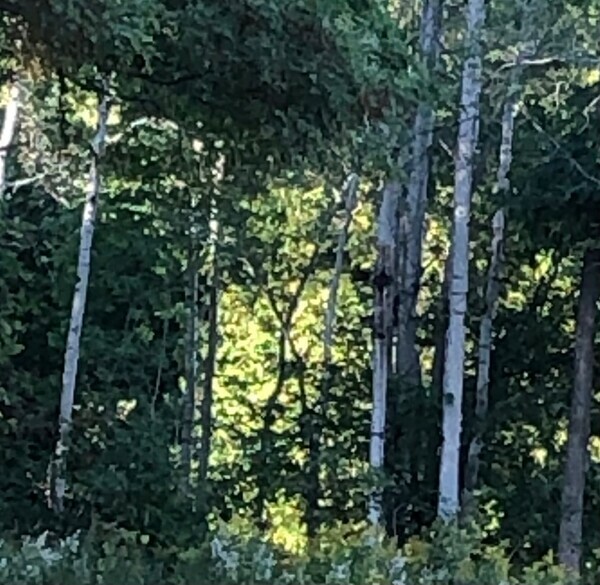 In the end, I got four little paintings. It was hard not to release them on the website as they were completed because I was excited about each one as I finished.

So there we have it:  Different strokes for different artists. I needed to approach each canvas with a new idea.*

*Does that mean I wouldn’t have done a very good job if my four children had been quadruplets? We’ll never know!

Below: The series, related by composition 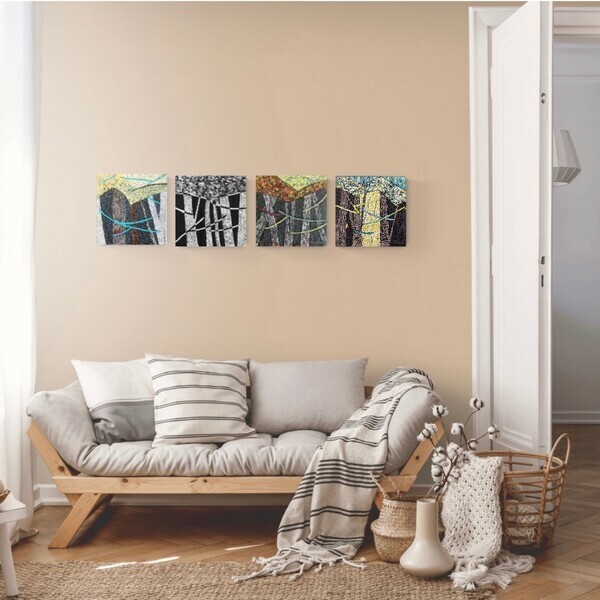